This is a pertinent question that many middle-easterners have pondered. Which of the many of the earliest peoples and civilizations are modern middle-eastern populations descendents of? It is question difficult to answer, due to the highly dynamic nature of the area, lack of detailed documentation and the intense population movements. Factors that have made the task of identifying these exceedingly difficult, unlike more peripheral and historically isolated regions in the world. However, I believe that the recent discoveries within archaeo-genetics and sequencing of members of prehistoric groups in the region has been immensely helpful in giving us profound insights into this issue.

There are 2 populations that are important for the formation of the modern west-Iranic people.
The pre-iranian populations that had already settled in the zagros since the Chalocolithic(5000 B.C and onward), and the later oncomers, the Central-Asian Indo-Iranian immigrants who arrived during the bronze age from the steppes of Central-Asia. The former was important for the foundation of the civilizations and cultures, such as Elamites, Kassites, Manneans, Gutians. They in overall share a similar material culture, and their ancestral contribution is formative for the overall genetic character of the modern west-iranians, while latter had a profound cultural and linguistic impact. Many people within the Iranosphere, for sentimental, nationalist or romantic folk reasons, like to empathize Indo-Iranian heritage.  Emerging genetic evidence however seems to suggest that while their genetic impact in the Iranian plateau was significant and widespread, it was relatively small. In-comparison to the east-Iranian speaking populations( Such as the Pashtoons of Afghanistan, the Pamiri speakers of the Pamir valley) in South-Central Asia, who seem to have received significantly more admixture from the Indo-Iranian speaking steppe groups, based on existing genetic models. This is largely due to their ancestors closer proximity to the Indo-Iranian homeland. The Indo-Iranians, seem to have played a role, much like the later  medieval Turkic immigrations, as the cultural and lingustic patrons of the regions they conquered and settled, with a limited minor genetic contribution. This is consistent with the elite dominance theory.  That is: a small conquering elite, ruling a larger subjugated populace. Regardless, their impact was significant enough to alter the genetic affinities of pre-iranian zagros populations, to the point that modern west-Iranics do not genetically cluster with  pre-Iranian Zagros populations. I will demonstrate this later in the post.

Recently the Paleo-Geneticist Lazaridis et. al and his team, released the study findings of their latest comprehensive paper on the prehistoric cultures on the Neolithic farmers in West-Asia that have been sequenced. The perhaps single most important finding related to our issue, is the sequencing of  several Iranian-Chalcolithic genomes from Chalcolithic aged human remains. The chalocolithic was an interim period between the late Neolithic and the early Bronze age.  The Iranian-chalocolithic samples would therefore be representative of the pre-Iranian populations who settled the western part of the Iranian plateau. As in this study, they apparently completely lack indo-iranian steppe admixture. Which can be seen here, in this modified PCA plot created by the Eurogenes blog author David(with modifications for the readers, note all credits goes to david of eurogenes for making this PCA plot): 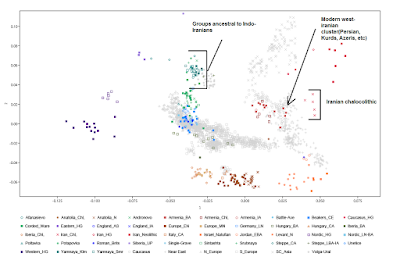 (A higher resolution version of the modified PCA plot can be found here:https://drive.google.com/file/d/0BwH18JGBEj2IcjBaUU1TemlvbTA/view?usp=sharing )

As one can observe by looking at the PCA plot. The indicated modern West-Iranian groups are substantially genetically shifted towards steppe groups compared to the Iranian Chalcolithic.  Which is the primary reason for why they cluster with Transcaucasians(who also have significant European like ancestry, via different waves into the caucasus) rather than Chalcolithic era Iranians.

So this naturally leads to the question. How much Indo-Iranian ancestry exists in modern day West-iranian groups? David from eurogenes made a qpAdm model estimate with samples from various iranian groups available which is useful in giving us a weighted insight:

Noteworthy is how the Lurs(who are related to Feylis), clearly have the highest estimate of Pre-Indo-Iranian ancestry, compared to Mazanderanis, a North-West iranian group. Which is in line with their topgraphic location and the history of Indo-Iranian immigrations, concentrating more heavily in North-Western Iranian areas, which also meshes quite nicely with north-iranian groups higher euro-like affinity in different genetic tools.

Curious as to the rate of steppe admixture in Feylis. I asked David to model the available Feyli samples as part Yamnaya, Sintashta, and Andronovo(The last two being representatives of proto-indo-iranian steppe groups). And he came up with these results:

As one can see here, the Feylis are as predicted, very similar to Khorramabadi Lurs. This is in line with the historical and ethnological relationship between the groups.

The low estimate for indo-iranian ancestry is supported by the available haplogroup assignments of Feylis, which are almost entirely near-eastern. The R1a1-Z93 branch, which is associated with steppe expansions into south-asia, south-central asia and west-iran, and widespread in modern day indo-iranain speakers at relatively high frequencies. Is completely absent in Feylis, who almost completely display near-eastern related mutations, (a list of assignments which can be viewed in the post here):
Feyli DNA haplogroups

In the next installment I'll go more in-depth into the historical candidates for the feyli ancestors.

Special thanks to David from Eurogenes for providing the above material.


Reference list:
The genetic structure of the world's first farmers

Hopefully this will be a useful reference to anyone interested in Feyli or SW iranian genetics. I'll be dwelving more extensively into the topic and explore as I learn more on this.
Upplagd av FeyliDNAprojectadministrator kl. 17:51 Inga kommentarer:

Also a special thanks to the author of anthromadness for advice on procuring the charts.


The following Y-dna/MTdna results are from the project derived samples:

The complete list of Feyli haplogroups however(Including project members not derived from the original project case, aswell as 23andme members):

Conclusive statements:
From looking at the Y-DNA/mtDNA at face value. The haplogroup assignments do appear to be related to the farming cultures that emerged during the neolithic expansions in near-east, which is to be expected for isolated zagros groups. Several lineages listed above do0 however deviate from the general pattern. I'll proceed with caution, and I intend to do a follow up, when i'm more firmly grounded in my knowledge of paternal chromosomes.


Greetings,
I'm the the project administrator of the feyliDNAproject.  A genetic project whose primary aim is to test members of the Feyli tribes from Ilam, to publish DNA results regarding feylis, and to collaborate with other independent projects and genetic bloggers, and to raise interest and encourage members of the feyli community to test themselves with commercial, easy to use platforms, such as 23andme.

Until recently, there was very little genetic data,  pertaining to feylis and south-western iranian groups in general. This project is one stepping stone in the effort of mapping the genetic variation of the vastly understudied areas of SW-iran. 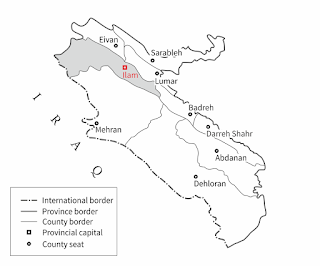 In this blog, besides publishing the DNA results from the 7 purchased kits,  we will also be exploring phylogenetic connections of feylis, and collaborate and participate in other projects.

FeyliDNAproject is entirely self-funded and community driven. The 7 kits were purchased by the project creator.


*NOTE:
Should you want to publish anything related to the feylidnaproject, such as results, data, please do contact me beforehand. In keeping with respect to the projects integrity and property. Should you have any inquiries, pertaining to the project, publishing project data, feyli history, or any general inquiries. You can contact me via the official email adress at: feyli.dnaproject@gmail.com